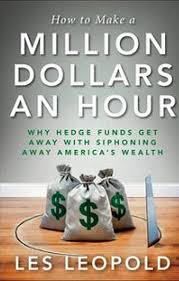 “How to Make a Million Dollars an Hour: Why Hedge Funds Get Away With Siphoning Off America’s Wealth” ~ A book by Les Leopold

Les Leopold’s latest masterpiece, “How to Make a Million Dollars an Hour: Why Hedge Funds Get Away With Siphoning Off America’s Wealth,” is necessary, alarming and really funny. His talent for deconstructing complex financial terms and topics constitutes a public service. What he reveals in “How to Make,” in a sardonic and appropriately irreverent tone, is something more ominous. We exist in a political-economic system that allows people who manufacture nothing and bet on everything to control the financial destinies of the rest of the population with impunity, and make stupendous amounts of money doing it. Because, as Leopold writes, “Making a million an hour means never having to say you’re sorry.”

That inanity is what makes Leopold’s book so important, especially now, when the powers-that-be are pretending we’re back to our pre-2008-financial-crisis status—and that’s a good thing. Hey, the stock market hit all-time highs—that’s never happened ahead of a major catastrophe before!

His “handbook” approach to a pretty arcane topic is hilarious and horrifying. His lively chapters are divided so that they read like a twelve-step Capitalists Anonymous program on how to achieve wealth nirvana.

There’s Step 2, “Take, Don’t Make,” which asks how can these hedge fund managers who create absolutely nothing tangible be rewarded so outrageously for it? There’s Step 7, “Don’t Say Anything Remotely Truthful”—well, that speaks for itself. And Step 9, “Bet on the Race After You Know Who Wins,” gets to the heart of how these managers, who inspire a plethora of reverential business magazine profiles and books, aren’t doing anything particularly daring or even smart. Hell, it’s not hard to find the bodies if you’re the one burying them.

Leopold opens with comparisons of wealthy categories of humans from top entertainers to sports legends to CEOs (including bank CEOs). Only then does he reveal the ones who warrant the book’s title—the top 1 percent of the top 1 percent elite hedge fund managers who bag billions of dollars per year, and millions of dollars per hour, making 100 times more than the top bank and insurance CEOs. Some even approach $2 million an hour such as David Tepper did in 2009, or John Paulson did in 2010 (well, $2.4 million an hour).

Rhetorically Leopold asks, “What on earth do hedge fund managers do to justify making all that money?” To answer, he carefully debunks all sorts of reasons that hedge fund managers and their followers give to explain how valuable they are. Some of these non-reasons include their contribution to financial innovation and fixing price deficiencies in the market. To which, Leopold responds, “So what?” (Thank you, Les!)

In fact, because of the mega amounts of leveraged capital these funds have at their disposal—courtesy of the banks that help fund them—they are much more likely to jump ahead of trades and force the market to move as they want, then massage it into some kind of free-market-philosophy-inspired equilibrium.

The truth is that hedge funds are risk breeders and carriers, not diffusers. They operate in a relatively unconstrained manner, hiding their positions and strategies to remain “competitive.” Leopold does an excellent job of exposing the ways they manipulate our economy behind that curtain, where the only doctrine they follow is the one that makes them the most money.

Take the irony of Tepper’s Appaloosa hedge fund that bet against free-market ideology and for government bailouts, by betting that after the 2008 financial crisis began the government would not let the big banks fail. He was right. In 2009, he made $4 billion. He profited from us bailing him out. As Leopold writes, “The bailout saved the entire hedge fund industry from utter collapse.” And these guys didn’t even hold FDIC-insured deposits or insurance polices. Think about that.

In Step 3, “Rip Off Entire Countries Because That’s Where the Money Is,” Leopold recalls George Soros’ epic hedge fund bet against the British pound when the European Exchange Rate Mechanism was coming into being. He made $1 billion, while British citizens got economically hosed. More recently, MF Global (which operated like a hedge fund) made similar bets, only it used more complicated derivatives to do so. And there’s a host of hedge fund and other forms of speculation slamming various European countries again. This is in addition to the harm that the big banks with hedge fund support did when they collaborated to disperse toxic assets to smaller banks across Europe. Those banks either went bust (along with the assets) or got European Central Bank bailouts depending on their political connections. The results are economic havoc and austerity measures across Europe.

Leopold provides a compelling history of risk deterrents and risk enablers. After World War II, politicians and bankers wanted a more stable financial framework, which they believed would also benefit them. Before that, the Great Depression brought about the Glass-Steagall Act that curtailed Wall Street’s ability to take risk, or its leaders to get overly compensated for creating it. From the 1940s to the 1970s, the world was calmer. Then, 1970s and 1980s deregulation and tax havens for the über-wealthy ushered in dozens of financial crises.

To see long excerpts from “How to Make a Million Dollars an Hour” at Google Books, click here.