Breakdown of the $26 Trillion the Federal Reserve Handed Out to Save Incompetent, but Rich Investors

Posted by AbZu on December 23, 2012
Posted in: Economy, Zeitgeist. Leave a comment 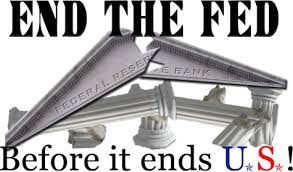 Below is letter from former Congressman Alan Grayson. It’s a breakdown of the money the Federal Reserve gave out to save rich investors from their own incompetence. Everybody assumes the Federal Reserve was out to save the banks. That’s not true. The Fed was out to save wealthy investors. If they hadn’t, a lot of rich people would be applying for jobs at Seven-Eleven. A ton of political campaign money would have dried up. A lot of money that corrupts the political system would be gone. A ton of corruption would have died. Goldman Sachs would’ve disappeared into bankruptcy. So while saving rich investors from their own stupidity, the Fed was also ensuring the continued corruption of the corporate wing of the supreme court, congress and the presidency.

There is one other matter I disagree with Congressman Grayson about in regard to the Fed’s actions. The Fed says most of the money it lent out has been paid back. That may not be true. If fact, it’s probably not true. The Fed may, or most likely, have simply cooked its own books to make it appear so. Maybe that’s why corporate profits are at record highs during this period of suppressed demand. How could they have record profits? How could they have paid back $26 trillion in loans in such a short time? That’s almost twice the domestic product of the entire United States. There’s only one answer. It’s not possible. They didn’t pay the money back, at least not most of it. The loans that were not paid back are being used to increase corporate earnings. The higher profits are going toward higher dividends and enhanced share prices for the wealthy. That makes the loans another conduit of unearned income for wealthy investors, as well as another pipeline for government corruption. Corruption is rampant, so don’t think the Fed is immune from it, since it saved the corrupters of Democracy, and likely made them richer in the process.

There’s something significantly more to this scandal and it goes something like this. But first, we need a definition.

A credit default swap is an insurance policy, usually provided on bonds backed by home mortgages. According to some sources, there were $60+ trillion worth of these insurance policies at the beginning of the housing collapse in the summer of 2006.

Institutions such as Goldman Sachs and a ton of unregulated investment firms called hedge funds took out insurance policies on mortgage backed bonds. These people were betting the market would collapse. They were right, even though some of them were selling the bonds up to the housing collapse and even a little after it began, even while telling hapless and really stupid (but wealthy) investors what wonderful investments the bonds were.

This leads me to believe that trillions of those dollars of unrepaid Federal Reserve loans went toward reimbursing the holders of the credit default swaps, which may be why all of those Goldman Sachs and Citicorp executives and hedge fund managers have been getting wonderful bonuses during the economic collapse they helped to craft.

Think about it. The government bailed out the insurance company AIG because of the billions of dollars of mortgage backed bonds it had insured, and that subsequently become worthless when the housing market melted down.

Let’s be clear about one thing. The government didn’t bail out AIG, although they technically did. The government actually bailed out the rich investors by bailing out AIG. These were the foolish folks that had bet that the mortgage-backed-bond market would collapse, and they’d get rich when their insurance policies (credit default swaps) bore fruit. And then came the fat surprise!

The entire insurance industry of planet Earth couldn’t possibly pay out $60+ trillion to those who’d bet on the housing market collapse. That means a bunch of rich fat cats made a bet on a market (credit default swaps) that could not sustain itself. They lost their shirts because they were dumber than a cat’s fart. Unless, of course, they expected the Fed to save their worthless hides.

The Fed’s rescue was most likely negotiated by Fed officials and Wall Street executives in one or more secret meetings. It’s possible executives simply begged Bernanke for financial salvation and he relented, but that’s unlikely.

Either way, the Fed stepped in to save their extraordinarily wealthy friends, like Goldman Sachs, their investors and numerous hedge funds.

In other words, if you were rich and dumb and placed your money in a market that was doomed to collapse, like the credit default swap market, you should have lost all of the premiums that you paid out. Coincidentally, although sizable (probably exceeding a trillion dollars), the money paid out in premiums represented only a fraction of the $60 trillion sized market.

The Federal Reserve doesn’t serve the common people or the nation. The officials at the Fed have only one thing in mind; to serve the wealthy people that control them.

So let me restate this succinctly: The Fed has paid out trillions of dollars in alleged loans and claimed they were paid back when it was impossible to have done so. The recipients of the money, the richest of people and investment companies that control the world’s most powerful government, also had to have cooked their books in order to make it appear they paid the money back.

That means they couldn’t have paid any taxes on trillions of dollars of free income provided by the Federal Reserve Bank.

Ben Bernanke is part of this crime wave. We’re also talking about hedge fund managers, investors of all stripes and sizes, basically, a ton of rich people. Obama may have even known of this crime. Why else would the Department of Justice be totally blind to this issue? Where is the investigation? Even if we had one, the crimes would be white washed in an ocean of corruption.

But then there’s the fear factor. If common people even knew there was an investigation, the demands for justice would be massive since most people now know or suspect how corrupt the financial sector and the government are, and how much and how tightly they are entwined.

I’m no attorney, but I can kind of guess what crimes have been committed, at least some of them. How about tax evasion? How about Accessory to Tax Evasion? How about obstruction of justice? Racketeering? Money laundering? And probably lots more. If you’re rich, you own enough politicians and Supreme Court and other justices that no charges will ever be brought against you.

Goldman Sachs and other banks are businesses. So are hedge funds. So racketeering applies.

Criminal.laws.com also defines money laundering as “a financially-based criminal act that is employed in order to purposely conceal, misrepresent, and disguise all applicable nature or details with regard to financial income in the form of monies. Money Laundering can be instituted in order to attempt to hide the source of generation of a particular flow of income or to mask the process of the spending of monies. Furthermore, Money Laundering can be utilized in order to mislead investigations involved in the determination of the particular spending pattern or trend with regard to an individual or entity. While Money Laundering is not specific to commercial activity, it most commonly takes place within the scope of business activity.”

Money laundering clearly applies and it should be obvious to anybody with a second grade education.

Ben Bernanke is up to his neck in these crimes. Perhaps more realistically, he buried himself completely in it.

Anyway, the link below takes a look at what President Obama may or may not have known about the $26 trillion and how his knowledge impacted one of the policies he proposed. The link below that is important information about the Federal Reserve. Enhancing corporate profits was not the only thing done with the unrepaid money; the third link below goes into that issue. Much of the money went to pay off rich people holding credit default swaps.

Congressman Grayson’s letter is below the third link.

The enormous implications of the bailout to the 99 percent. Click here for an analysis of what Obama may have known about the $26 trillion

Who Holds the Federal Reserve Responsible for Its Actions?